Dance with Me Bouquet with Red Roses

Cinco de Mayo (Spanish for "fifth of May") is the anniversary of a Mexican military victory in 1862 in the fight for independence from French forces. It is a festival of Mexican pride and heritage in the United States. In Mexico it is primarily celebrated in the state of Puebla, where the holiday is called El Día de la Batalla de Puebla (The Day of the Battle of Puebla).

Use flowers to decorate your Cinco de Mayo party

Whether you are holding your bash at the office or outdoors, don't forget to hang up a candy filled pinãta! A centerpiece on your Cinco de Mayo fiesta table will bring more color to the festivities. In our arrangements we've used vivid yellow, spicy red, bright orange, hot pink, bold purple, and lime green. Olé!

Mexicans and Latinos celebrate Cinco de Mayo in the US

Celebrations include wearing traditional dress and sombreros. Mexican symbols, such as the Virgen de Guadalup and demonstrations of baile folklórico crafts. It is a day to celebrate the culture, achievements and experiences of Mexican-Americans, such as César Chávez, who have achieved fame, fortune and influence in the United States. Close 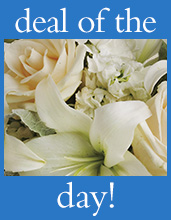 Teleflora's In Love With Lime Bouquet
$59.99